The Wende Museum Announces The Robin Center For Russian-Speaking Jewry 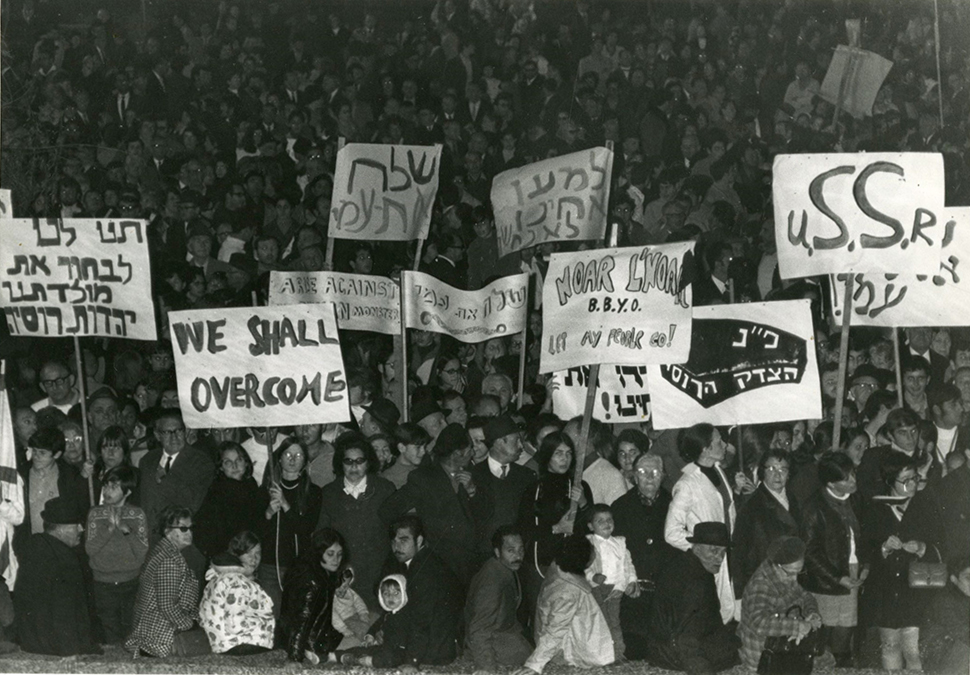 Mass demonstration in front of the Finnish Embassy against the guilty verdict in the Dymshits–Kuznetsov hijacking affair, 1970, Israel, photo from Encyclopedia Judaica.

From the 1970s to the early 1990s, it is estimated that nearly 1.5 million Jews left the Soviet Union in one of the largest mass emigration movements in world history. During the Cold War, Soviet Jews experienced discrimination and often were disciplined when they applied for exit visas. Jews whose requests to leave were refused earned the label “Refusenik,” and their movement became one of the pivotal political and cultural movements of the last half of the 20th century.

Envisioned and underwritten by Wende Museum Board and Committee members Edward Robin and Peggy Robin, the Robin Center for Russian-Speaking Jewry will preserve the history of the Soviet Jewish experience, and make it accessible to scholars as well as the general public through digitization, public partnership, acquisition of at-risk collections, and sustained, dynamic programming with an emphasis on engagement with archival materials through artmaking workshops and educational activities. The Center’s mission is to deepen and expand awareness of the history of Russian-speaking Jews, Jews who lived in the Soviet Union, and the Refusenik movement.

At this moment, significant collections relating to the history of Soviet Jews are scattered, at risk of being lost, or inaccessible because they are sitting uncatalogued in storage boxes. Scholars and descendants alike are lacking important sources of information, and the collective memory of Refuseniks and Soviet Jewish émigrés is being forgotten. The Robin Center will work to digitize the Wende’s growing collections of samizdat material documenting Soviet Jewry and the Refusenik movement. Its lessons are both specific to the unique legacy of Russian-speaking Jews and relevant to a wide public, as they relate to some of the key topics society struggles with today, including migration, protest, political watershed moments, and social justice.

“The Robin Center could not have a better home than the Wende Museum,” said Robin. “With its nearly twenty-year commitment to acquiring, preserving, and providing access to at-risk materials from the Eastern Bloc, the Wende and its innovative programming guarantees that the history and memory of Soviet Jewry will endure within the vital context of the Cold War period.”

The Center’s first endeavor is the forthcoming exhibition Soviet Jewish Life: Bill Aron and Yevgeniy Fiks, opening November 14, 2021, at the Wende Museum. Presenting documentary photography of Jewish communities in the USSR in the early 1980s, together with an artistic reinterpretation of twentieth-century Soviet Jewish history, the exhibition centers the Soviet Jewish experience and will be accompanied by a series of free, public programs and educational workshops. The Wende will host a press preview on Friday, November 12, at 10 a.m.

The Wende Museum is an art museum, historical archive of the Cold War, and center for creative community engagement that explores and inspires change. Founded in 2002, the Wende holds an unparalleled collection of art and artifacts from the Eastern Bloc and promotes a multi-layered exploration and discussion of the period. Named for the German word meaning “transformation” that describes the era leading up to and following the fall of the Berlin Wall, the museum serves as a foundation for dynamic programming that illuminates the political and cultural changes of the past and sparks personal and social changes for the future.

The Wende Museum is open Fridays, Saturdays, and Sundays from 10 a.m.–5 p.m. Admission is free. For more information, visit wendemuseum.org or follow the Wende on social media: @wendemuseum.